It goes by a variety of names, but the much talked about convergence of technologies that is taking place in manufacturing is not a trend at all. Much more, it is a significant step in a gradual but inevitable evolution driven by persistent inefficiencies and technology gaps in the conservative industrial world. If the first Industrial Revolution was spawned by the steam engine and the second and third by electrification and the advent of the computer, then it is fair to declare the internet- and information-driven economies of today as the dawn of the fourth Industrial Revolution, or “Industrie 4.0”. 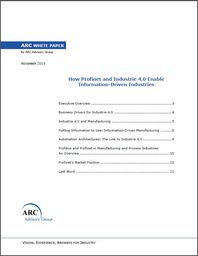 The concept of Industrie 4.0, sometimes also called In-dustrial Internet of Things (IIoT), began as an initiative by the German government to ensure the competitive-ness of German industrial companies at home and abroad (hence the German spelling of Industrie). Other concepts like IIoT are not as formal, but have also risen out of the necessity for manufacturing industries to catch up to the rest of the world in terms of the strategic use of information technologies.

Industrial companies stand to reap huge benefits by defining and imple-menting the tenets of Industrie 4.0, but to achieve this, they need to ensure that the right infrastructure is in place to support it. This is where a future-proof automation architecture plays an important role. In the past decade, commercial information technologies have pervaded, replaced and en-hanced traditional “hardened” industrial technologies in an unprecedented way. Leading the pack has been the success of industrial Ethernet at both the control and the device level. Industrial users benefit from industrial Ethernet’s seamless compatibility with enterprise level networks and standard internet protocols, but also from technical enhancements that ad-dress the specific performance needs of demanding industrial applications. These include service orientation and interoperability at the application level, permitting devices to interact in all life cycles of a plant.